A huge number of Seniors are online says Stats Canada 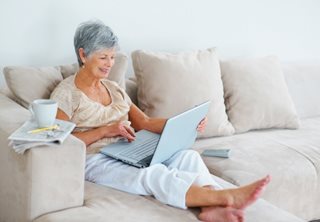 A new study released by Statistics Canada has exposed some of the online media consumption habits of Canadian seniors. It is important to note that although the study was released in 2013, it uses data from years prior to 2011 showing an upward trend — so today's numbers are certainly even higher! It merges a number of different sources to show a clear and drastic increase in the number of seniors consuming media online.
The study gives a summary of all ages groups that you can see here. It shows the percentage of respondents that “Used the Internet in previous month”
Practically everyone under 44 goes online at least once a month, and the numbers from 45-64 are very high as well. But perhaps the most surprising is the 65 and over group: the majority of them are regular Internet users as well!
So what are these seniors doing online? The study concludes that most seniors are not watching TV or music like the younger generation. There was no mention of social media in this study, but another from 2011 says 68% are on social media, and yet another says 88% most are using email as well.
Many Quebec businesses not responding to the demand
Therefore it appears that the Internet has not completely replaced old mediums (books, TV and music) for the silver generations, and they are sticking to their existing habits for now. However you can reach seniors with your marketing efforts using newer innovations like Facebook and email where there is no traditional alternative.
There is truly no business that can say “my demographic isn't online”.
On that note we will leave you with the most shocking statistic of all: Less than 50% of all registered business in Quebec do not have a web presence according to Google!
Tweet
Recent posts
Content Calendars 101
The Importance of Infographics
Influencer Marketing: Why You Need It
Follow us on Facebook!