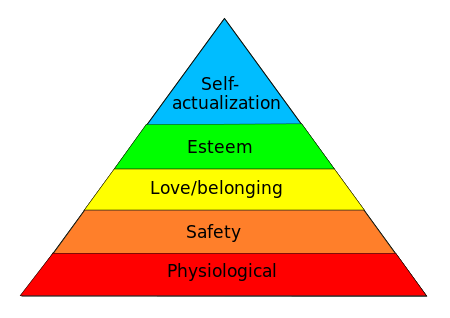 Social networks appeal to our basic needs, but fall short in the end. This might explain why so many networks become irrelevant.

Everyone knows that Facebook is an unstoppable force set to takeover the Internet, right? Social networks have a history of collapsing, so I wouldn't call that race yet. There are trends signalling that Facebook growth has stalled in the United-States (and other early-adopter countries), and it can only go down from there. Many analysts have tried to deconstruct the downfall of former giants, and I'm sure Facebook is working hard to avoid the same fate. Nonetheless, we humbly submit another attempt at figuring out why people eventually quit their favourite social networks.

The premise put forward in this article is that social networks appeal to our most basic psychological needs, but never really fulfil all of them. A well recognized identification and visualization of the needs we all share is Maslow's hierarchy of needs. According to Maslow, our 5 most basic needs are: Physiological, Safety, Love/Belonging, Esteem and Self-actualization. Since Facebook and Twitter requires a computer with an Internet connection, every user's truly basic needs are almost certainly covered (food and shelter). We can then move on to more existential ones such as belongingness, gaining the respect of others and self-actualization.

Social networks actually do a pretty good job at the first two. One might argue that online relationships are a bit shallow, but few would deny the genuine feeling of belongingness that social networks bring to many. And this could be a big reason why the big sites became so popular. Where they are less effective however, are in matters of "self-actualization".

The truth is there isn't room for much creativity on Facebook, and there is little substance in 140 character tweet. Social networks are too focused on “what's happening... right now”, and not enough on “what you could be tomorrow”. If people somehow got together to solve some sort of problem, or felt like they were are a part of something worthwhile participation in social networks could have deeper meaning and would continue to grow over time.

Kickstarter has a number of creative projects within it's database and would top off Maslow's pyramid perfectly.