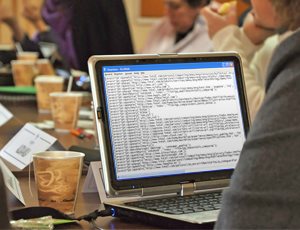 It's definitely starting to look like summer, and no, I'm not talking about the weather. But since we're on the subject... for our readers who live outside of Montreal and haven't heard, the big weather story in May was all about the rain. Absolutely crazy amounts of rain fell south of Montreal – twice the normal average – causing massive flooding.

The rain was plentiful in Montreal, however the web design events were not. As is usually the case in the summer months, there were so few events that we only released one edition of this list (not two as we were doing this winter). But if May events were scarce, June events numbered even less!

ABC Lunchinar - Multimedia on the cheap: Going beyond text in your communications
Wednesday June 1st 2011, The Montreal Museum of Fine Arts
The words “YouTube” don't figure in the description, but I'm pretty sure it will be discussed a lot during the presentation. Podcasting, vlogging and moving beyond text are central topics in this event.

Tournée INFOPRESSE Trois-Rivières - Ergonomics, social networks, interaction: the best of the web
Thursday June 9th 2011, Delta Hotel Trois-Rivières
We're going to break a rule of ours and post an event that actually takes place outside of Montreal since it's relatively close geographically, and very close thematically.

We usually focus on “once an year” type events, however, given the limited number of events this month, this is a great time to remind you of a few regulars that put on events every single month. This month we've decided to highlight two Javascript user group events.

It's early in the month, a few more events might pop up so check back in a couple of weeks – but no matter what we'll be back in July.