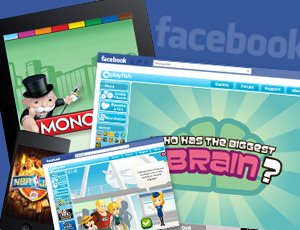 Gaming giant, Electronic Arts Inc. (EA) has recently opened a studio in Montreal that is devoted to the creation and design of Facebook games. You know, those games that have your friends playing night and day. The ones that tell you that your friend fruitfully harvested her corn fields, but that she is low on eggs, can you help? Although, we may get annoyed by some of these posts, with more than 600 million Facebook users, the gaming industry has landed on a gold mine and Montreal has been chosen to become the centre for creative genius for these games.

EA is second in social games popularity behind the California giant, Zynga which leads Facebook in the most popular social media games department. This particular gaming market is blossoming at a tremendous rate.

If you are still not convinced of the importance of Facebook as a means of promoting your business, it is perhaps time to reconsider. The gaming companies are taking Facebook very seriously. It is estimated that the revenues for Facebook social media games will be $1.1 billion in 2011, an increase of roughly 27% over 2010.

Facebook games, also known as “casual games”, are one of the fastest-growing divisions of the gaming business. The reality is that social media games reach a larger audience and a new audience, those that would never play a traditional console game. The explosion in popularity of social media and mobile games is offering not only new and exciting business opportunities to the gaming world, but many challenges as well. In the past few years, game developers often treated social games as second class citizens in comparison to the console games. Today, many realize that the future may lie in social media games.

Last year’s hot topic in the video gaming world was cloud-gaming. Today, social gaming is all the rage and, more particularly, how to release a new game available on PC, console (Wii, Xbox and PlayStation), mobile and social media at the same time?

EA’s social media gaming sector is a company called “Playfish”. EA acquired Playfish in 2009 for a cost of $400 million U.S. A total of six employees are working in Montreal at the present time, but this number should grow to fifty by the end if the summer.

While a console game costs millions of dollars to design and produce, social media games are much easier and quicker to produce yet their potential for success is without doubt just as significant. It is not a coincidence that EA decided on Montreal to open its social media gaming sector; EA’s mobile game sector is already settled in the city. The plan is to have the two divisions work in conjunction in order to bring the Playfish experience to the mobile sector by adapting social media games to Smartphone and Pads.

In a time when the hot topic in the gaming world is how to unite all the various game types in order to make the most of all money-making possibilities, Montreal seems to be in a very good place to take advantage of this growing business opportunity.