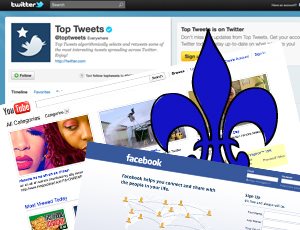 Whether it is Twitter, LinkedIn, Facebook, Foursquare or YouTube, the popularity of social media is indisputable. Although Internet marketing specialists agree on the advantages of a social media strategy, many Quebec companies are still hesitant.

Quebecers and Social Media
Even though a survey by the Conseil québécois du commerce de détail (CQCD) reveals that the number of Web users actively following companies on Facebook is not enormous, and these figures are even less significant on Twitter, Internet marketing specialists are unanimous that Quebec companies must adopt social media within their marketing strategy.

American Companies
With the arrival onto Canadian soil of American companies that are well established in the social medias, Jocelyn Desjardins, Director of communications and marketing for the CQCD insists that Quebec companies must take the plunge. He alleges that the importance of social media is going to skyrocket in the upcoming years. Mr Desjardinns compares a company’s presence on the Web to a store banner. Would you open a store in downtown Montréal without a sign outside the business letting people know you exist? Well the Web, and your active presence on it, is your sign, your brand.

More than just followers and friends
Time, energy and money must go into maintaining Facebook and Twitter accounts. Even though a person is not a fan of your Facebook page or following you on Twitter, there is nothing preventing someone from consulting your company’s page to see what others are saying about you. Thinking that the Web will only impact your “friends” and “followers” is incorrect, and may be damaging to your company.

In comparison to large U.S. brands such as Old Spice, Doritos and Target, Quebec companies may seem to be lagging behind in their adoption of social media as a powerful marketing strategy (e.g.: Old Spice posted a YouTube video that was watched 34 million times; the video showed a man answering question from the public, clad in only a towel). The European tendencies show that Quebec seems to be well into the social media game and even though many Quebec companies may be lacking when it comes to social media best practices, numerous companies have at any rate established their presence on Facebook, Twitter and YouTube. It appears that Quebec is at least keeping up with the peloton.

Adeo Internet Marketing is a website design and Internet promotion company that serves the Montreal area and beyond. Let us share our experience and expertise to help make your company build up its online visibility and presence. Contact us today!