SOPA, PIPA and everything in between 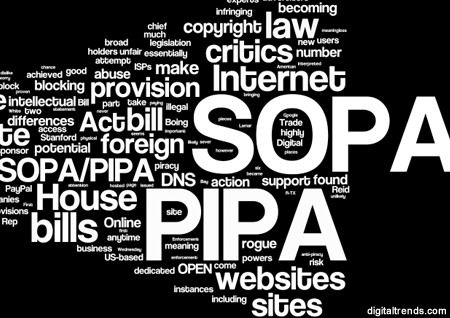 On January 18 2012, a dark cloud loomed over the Internet prompting popular sites like Wikipedia , Wired and Reddit to place a black veil over their websites in one form or another. This massive protest was brought on by something web surfers everywhere have come to know as SOPA. But what exactly is SOPA? How will it affect Canadian and international websites? What can you do to protect your website against it? Find out these answers and more in the following article.

What is SOPA and how is it worse than the DMCA:

A lot of people are referring to SOPA as being the DMCA’s little brother. Adopted in 1998, the DMCA’s main goal is to protect copyrights and intellectual property in today’s modern cybernetic age. SOPA is worse because it is, in a sense, a more powerful version of the DMCA. If this bill is made into a law, it would give the United States more power to fight a hopeless battle against digital copyright infringement. Some of the overreaching repercussions that SOPA would bring about are:

Why protest against SOPA:

While those who are for the adoption of SOPA into a law claim that it will protect the intellectual property market and the jobs related to it, those who are against it say that:

On January 18, a day dubbed as the Internet Blackout, many Internet users who wanted to access the following big-name websites were greeted by parts or all of the websites being censored in black:

What people seem to forget is that while SOPA is threatening the Internet and its content, if it does not pass, another law known as PIPA is waiting to take off where SOPA failed.

How will SOPA affect Canada and what you can do to protect your website?

This law could easily reach us here in Canada and it could spread to the entire world. According to Micheal Geist, an expert on the subject matter:

In the eyes of U.S. law, websites with domain names ending in .com, .net and .org are treated as American domestic domain names, regardless of where their owners are based. SOPA ignores the fact that IP addresses are assigned by regional, not national, entities. The American Registry for Internet Numbers allocates IP addresses for Canada (both for individual customers and governments) and 20 Caribbean nations, as well as the U.S. However, under SOPA, the IP addresses it allocates would be considered “domestic,” i.e., U.S., IP addresses.

It is still uncertain exactly how the bill will affect Canada if it is made into the law because it is constantly being rewritten thanks to all the protests. The best things you can do in order to protect your website against SOPA or other similar laws is:

While it is still an uphill battle, SOPA has not yet been made into an official law. The protests seem to be working and they have to continue in order for this law to destroy the Internet as we know it forever. A number of lawmakers in the US that were once supporting the bill, have now flipped their stance and that must continue.