Web browsers battling over you 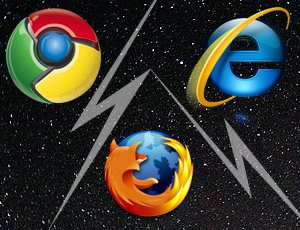 Although there are many search engines out there, the reality is that only a select few are actually worth your efforts. In your quest to have your site show up on the most popular search engine Web sites you need to realize that search engines are not just a place where web sites are displayed, but these pages act as a pathway to your website for potential clients.

Internet entrance ways
The back and forth battle of the three Web surfing portals is a long standing one and the ultimate goal is to rule access to the Internet. Critical update releases and free developers tools are some of the many tricks that browsers use to gain your attention and ultimately, your business.

Worldwide numbers
The Internet has evolved in the past twenty years when Netscape, the top browser at the time, was finally overpowered by Internet Explorer. Today, Internet Explorer is still on top as the world’s most popular Web browser, accounting for roughly 45% of the market share in February 2011. This figure is down from 55% from last year and about 65% from two years ago. Google’s Chrome and Mozilla’s Firefox have greatly contributed to Internet Explorer’s drop in domination. Firefox has approximately 30% of the world’s browser market over Chrome’s 17%, which is not too shabby for a mere 3 years existence.

The browser
Even though many companies devote time, energy and finances to the stand alone applications that ease the use of Internet services on mobile devices such as tablets and smartphones, the efforts that are put into improving and upgrading Web portals is a sign of the staying power of these traditional Web browsers.

Microsoft and Google are following the thought process that if they build it you will come and if they build it well you will come back frequently. By offering users an optimal entrance point to the Internet via a browser, these corporations are confident that the user will decide to stick around and make use of the other services offered such as search engines, emails and maps. These other services offer a goldmine in advertising potential.

So while you labour over the decision to optimize your Web site for web crawlers or consider whether your content is relevant and up to date, remember that every day billions of people are opting to use one search engine over another and these giants are doing all they can to acquire your business, be sure to ask yourself this…are we doing enough to attract potential clients that are surfing the Web?

Adeo Internet Marketing is a website design and Internet promotion company that serves the Montreal area and beyond. We will help you implement Internet marketing strategies to deliver results-oriented solutions that will make your business stand out and move forward.